When starting a business, why do you need a 970 area number?
By establishing a local phone number, you may establish a presence in your city.

What comes to your mind when you receive a number which bears a new area code? Most people hesitate to pick such calls for fear of being scammed. Others get concerned about the location of the caller and so on. In this article, you shall be duly guided with regard to area code number 970. 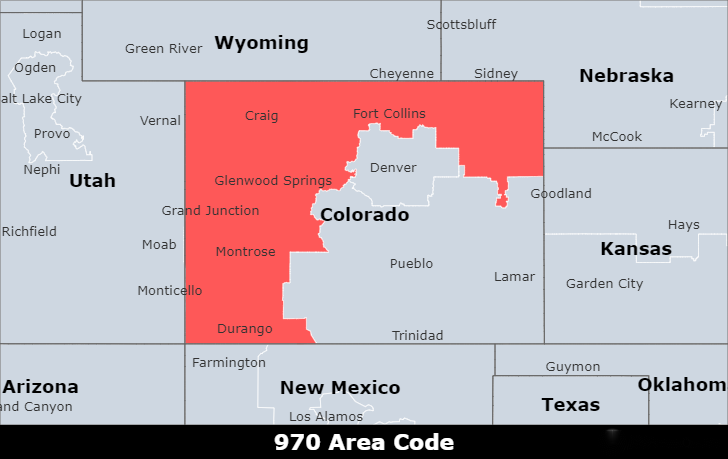 Where is area code 970 located?

Area code 970 is located in north and western Colorado and covers Fort Collins, Greeley, Loveland, and Grand Junction. It is the only area code that serves the area.

What timezone does the area code 970 belong to?

The 970 Area Code is located in the MountainTimezone.

Fort Collins, city, seat (1868) of Larimer county, northern Colorado, U.S. It lies along the Cache la Poudre River (the state’s “Trout Route”), in the eastern foothills of the Front Range, at an elevation of 5,004 feet (1,525 metres), 55 miles (89 km) north of Denver. The community developed after 1864 around a military outpost named for its commander, Lieutenant William O. Collins of Fort Laramie, Wyoming. The outpost was abandoned in 1872, but the settlement remained and, promoted by a town development company, grew with the arrival of the railroad and a highly successful sugar beet industry based on local irrigation and stimulated by a land-grant college (now Colorado State University) established there in 1870.

What are some of the area codes around 970?

Are there any scams from area code 970?

Would you wonder again about the location of your caller when you are called by a new number and of which area code is 970? Certainly not, courtesy of this article. Additionally, you are advised to keep your antennae for fraudsters who might establish a premium number with area code 970 for scamming as explained there above.

1. According to studies, consumers are more likely to call a business with a local phone number because they feel a local firm is more likely to provide personalised service. For example, a real estate agent with a local area code may be more enticing to potential customers since their company number displays an understanding of local nuances. To emphasise that your firm is a local one that prospects and customers can trust, use a local phone number.

2. Compete with large corporations: Using a local phone number may give you a substantial edge over non-local or national competitors if the service your company provides benefits from seeming to be a local enterprise.

3. Save money as your company grows: It can be expensive to open physical stores in all of the regions where you want to do business. EasyLine allows you to acquire several local lines without the cost or hassle of setting up additional office locations. Your business may be national, yet it has a local flavour.

Get a 970 area code number for your business

With a local phone number from EasyLine, you can build trust and loyalty.