Make your company stand out in a crowded marketplace.
Prospects and consumers are more likely to respond to local phone numbers.

It can be disturbing when you receive a call from a new area code. Where is the call coming from? Who is calling? Is it safe to answer? These are just one of the commonly asked question about the area code. The area code 949 is a unique area code that was created to provide service to a specific area across North America. Want to know more about this area code? You might wanna continue reading. 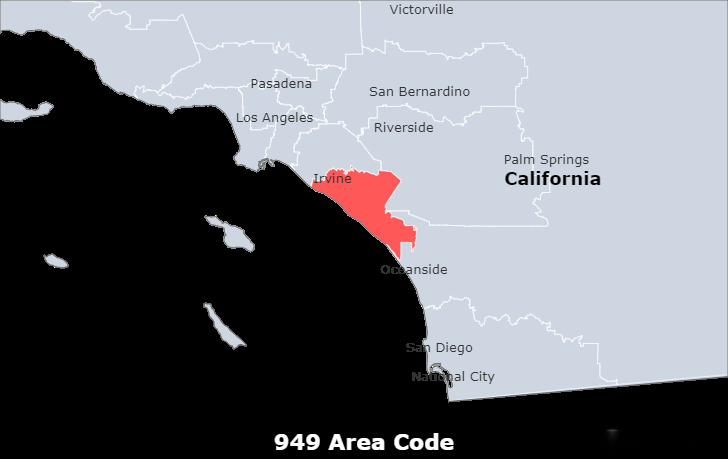 What is the location of area code 949?

Area code 949 is located in California and covers Mission Viejo, Newport Beach, Lake Forest, San Clemente, and Laguna Niguel. It is the only area code that serves the area.

What timezone does the area code 949 belong to?

The 949 Area Code is located in the PacificTimezone.

Irvine, city, Orange county, southern California, U.S. Adjacent to the city of Santa Ana (northwest), Irvine lies about 40 miles (60 km) southeast of Los Angeles. Originally inhabited by Tongva (or Gabrielino) Indians, the area was explored by Gaspar de Portolá in 1769. The land that would become the modern city (and one of the largest planned cities in the United States) was composed of parts of Ranchos Santiago de Santa Ana (1801), a Spanish land grant, and San Joaquin (1837) and Lomas de Santiago (1846), both Mexican land grants. By the 1860s much of the land had been acquired by sheep ranchers Benjamin and Thomas Flint, Llewellyn Bixby, and James Irvine (for whom the city is named). By 1876 Irvine had purchased the entire tract of what became known as the Irvine Ranch. His son inherited the land and established the Irvine Company in 1894. Irvine subsequently developed into a farming community, with crops that included barley, lima beans, olives, asparagus, strawberries, and oranges. During World War II, two U.S. Marine facilities were built on land formerly owned by the Irvine Company. The University of California, Irvine, was established in 1965 and is now the city’s leading employer; the campus houses the Irvine Barclay Theatre, which hosts concerts and other entertainment. The city is also the seat of Concordia University (1976) and a community college (1979). Other notable attractions are an amphitheatre, which holds up to 15,000 spectators for outdoor concerts, and the Irvine Museum (1993), which features California art from the Impressionist period. Irvine Ranch Land Reserve, with some 50,000 acres (20,000 hectares) of protected land—which constitutes more than half of the historic ranch—is popular for hiking, horseback riding, and bird-watching. John Wayne Airport, immediately west of the city, serves Orange county and is among the busiest airports in the United States. Laguna Coast Wilderness Park is adjacent to the southern part of the city, and the Santa Ana Mountains are to the east. Crystal Cove State Park is nearby. Inc. 1971. Pop. (2010) 212,375; Santa Ana–Anaheim–Irvine Metro Division, 3,010,232; (2020) 307,670; Anaheim–Santa Ana–Irvine Metro Division, 3,186,989.

What area codes are nearby 949?

Since some companies and other businesses also uses 949 numbers, scammers grab this chance to claim that they calling from a customer service team to claim your trust. There is also this "One-Ring Scam" where a robocaller rings your phone once before you could answer. Because of this, you will be curious and will think that you should call back. This scam charges you a fee just by calling the number and the cost might be even pricey.

Is a call from 949 phone number toll free?

Any 949 numbers in North America, are not toll free. Carrier and other companies requires to charge a fee every call that you will be making. Both international or local calls has a different rate of charges. International calls will be more costly compared to the local ones, since it is outside the range of the area. There are also calls that will be charged per minute or per text, depending on the company.

2. The value of the area code itself: For companies, having an area code that is appropriate to their location is crucial. A well-known phone area code is extremely valuable and difficult to get.

3. Greater corporate visibility: According to studies, easy-to-recognize area codes are perceived as more professional. Having a well-known area code, according to 73% of respondents, makes their company appear more genuine and professional.

4. Local clients trust local numbers: Including a local phone number in your local marketing efforts is a smart idea because local numbers are more well-known and reliable to potential customers. This is especially handy if your business wishes to target consumers in a certain location.

How to get a specific phone number with 949 area code?

Get US or Canada local numbers with EasyLine. We provide local and toll free numbers throughout the United States and Canada.

Buying a phone number couldn't be easier, simply search for a local phone number using our search engine to check availability. EasyLine will suit your business needs. If you want to buy a phone number that has a special or memorable sequence of numbers, toll free numbers would be more suitable.

To make your brand stand out in the crowd, choose and buy a local business phone number in following steps:

Get a 949 area code number for your business

EasyLine gives you not only phone calls, but also other powerful features and solutions.