Use 909 area code to reach out to your prospects in your area.
Create a presence in your community.

909 was first put in service November 14, 1992. It was created from area code 714. 909 was split in 2004 creating the need to update some of the phone numbers to area code 951. To avoid exhausting all possible phone numbers in this area code, relief planning has begun. 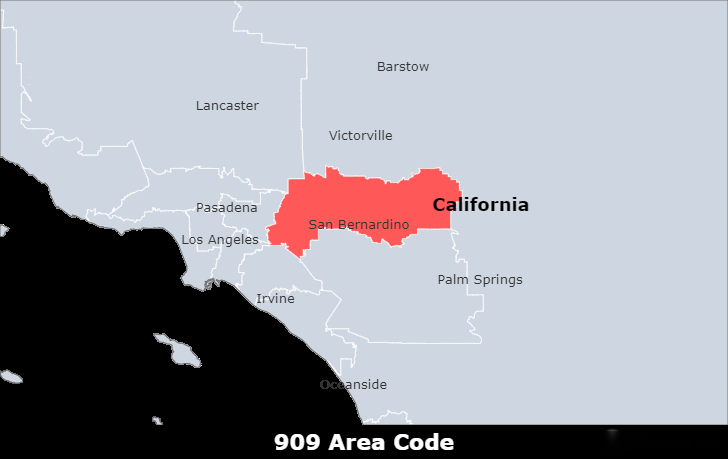 Where does area code 909 come from?

Area code 909 is the area code for San Bernardino, CA and the surrounding areas. It is the only area code that serves the area.

What is the timezone of area code 909?

The 909 Area Code is located in the PacificTimezone.

What is the major city in area code 909?

San Bernardino, central city of the San Bernardino–Riverside–Ontario metropolitan complex, seat (1853) of San Bernardino county, southern California, U.S. Located east of Los Angeles, the city lies at the base of the San Bernardino Mountains. It was the site of a Spanish mission (1810) named for St. Bernardino of Siena. The mission was closed in 1834, and the land was later sold to Mormons, who established a fort and laid out a town in 1852. The discovery of gold nearby in 1862 brought an influx of settlers. San Bernardino developed as a trade centre chiefly for the surrounding citrus groves and vineyards. Aerospace and electronic industries, Santa Fe Railway shops, and other industries are now the economic mainstays. A community college was established in 1926 and California State University at San Bernardino in 1960. The city is headquarters for San Bernardino National Forest and the distribution point for the Lake Arrowhead resort area (named for an arrowhead-shaped rock formation in the San Bernardino Mountains). Popular local events include the National Orange Show (March) and the Route 66 Rendezvous, a classic-car show. Angeles National Forest is nearby. Inc. city, 1854. Pop. (2010) 209,924; Riverside–San Bernardino–Ontario Metro Area, 4,224,851; (2020) 222,101; Riverside–San Bernardino–Ontario Metro Area, 4,599,839.

What are some of the local codes near 909?

Why do people prefer vanity local phone numbers that are one-of-a-kind for advertising?

Most customers prefer calling a local number, especially if they’re trying to reach a local shop, sole trader or a taxi company. By adding a local number to your website or business cards you create the impression that your business is based just around the corner, which eases the customers' experience and makes them feel more comfortable when calling a company with a local number. It also helps enhance your business reputation and credibility among local customers, which might lead to a higher volume in business leads and potential sales.

Using a second local business phone number also cuts from the traditional landline cost as you won't have to pay for a fixed BT landline anymore. With any of Virtual Landline plans you’ll be paying only the monthly subscription price for the plan and all inbound or outbound call activity will be deducted from the inclusive minutes, depending which plan you've chosen.

Is it possible to obtain a certain local phone number with the area code 909?

Local numbers are a lot more affordable than you’d expect. EasyLine makes it simple to get local numbers for your business. After you sign up, you'll be able to begin picking local or toll-free numbers, regardless of the type or size of your business.

EasyLine is ideal for small enterprises, sole proprietors, and freelancers. To small businesses, no matter what industry you are in, EasyLine provides powerful features/solutions to meet your needs. To individuals(solopreneurs and freelancers), make it easy and affordable to look more professional and communicate like a much bigger company.

Get a 909 area code number for your business

To claim your new number and get started with EasyLine, try searching for your preferred area code.