Obtain a 567 area code phone number for your branding.
To get you up and running much easier. 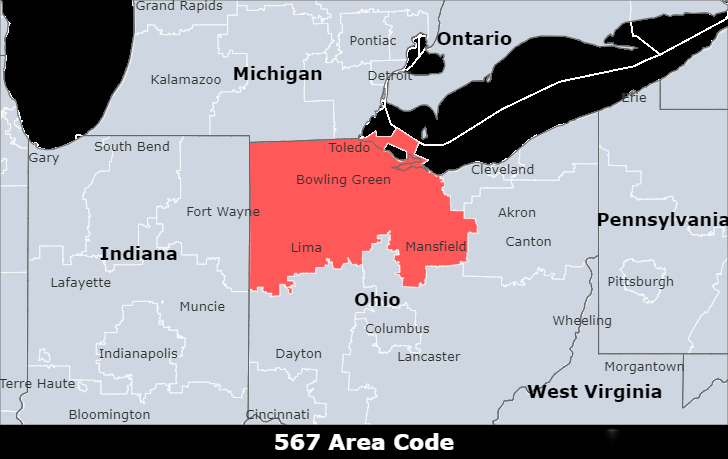 Area code 567 is located in northwestern Ohio and covers Toledo, Mansfield, and Findlay. It is an overlay for area code 419 and serves the same area.

What timezone does the area code 567 belong to?

The 567 Area Code is located in the EasternTimezone.

Toledo, city, seat (1835) of Lucas county, northwestern Ohio, U.S., at the mouth of the Maumee River (bridged). It lies along Maumee Bay (southwestern tip of Lake Erie), about 55 miles (89 km) southwest of Detroit, Mich., and is a principal Great Lakes port, being the hub of a metropolitan complex that includes Ottawa Hills, Maumee, Oregon, Sylvania, Perrysburg, and Rossford. The area was opened to white settlement after the Battle of Fallen Timbers, a conflict fought nearby in 1794 and resolved in a series of treaties negotiated with Native Americans between 1795 and 1817. Fort Industry (1803–05) was located at the mouth of Swan Creek (now downtown Toledo), where permanent settlement was made after the War of 1812. Two villages, Port Lawrence (1817) and Vistula (1832), were consolidated in 1833 and named for Toledo, Spain. The united community was incorporated as a city in 1837.

Which area code is closest to 567?

Why do you need a memorable vanity local number for branding?

Getting a second professional local number is better for business.

1.Grow faster. Be whoever your customers want you to be with a local number, or choose a number for instant local presence.

2.Save money. Avoid the need for a dedicated business landline, additional handsets or an expensive phone system.

3.Base yourself anywhere. Change your destination number at any time, allowing you to work just about anywhere you choose.

4.Free up time. Stop giving out your personal number, and stay in control of exactly where your business calls ring.

Where can I obtain a local phone number for business with the area code 567?

Don’t have a number to transfer across? Looking to create a local presence somewhere else? No problem — Get an extraordinary local number for your small business with EasyLine. EasyLine offers all types of numbers in all 48 mainland US states, and most Canadian states.

With EasyLine, we provide branding solutions for small business, solopreneur and freelancer, it helps you capture the attention of your audiences. You can also make business calls using VoIP and cellular phone service, it’s a more flexible phone service for individuals and small businesses.

If you’re looking forward to getting a local number for the best price, EasyLine is definitely the one you’d pick. A unique vanity local phone number could boost your sales and leads for sure.

Get a 567 area code number for your business

Expand your reach and promote a local presence nationwide.