The majority of what you need to know about 508 area code can be found right here.
Amplify your brand with an easy-to-remember local number. 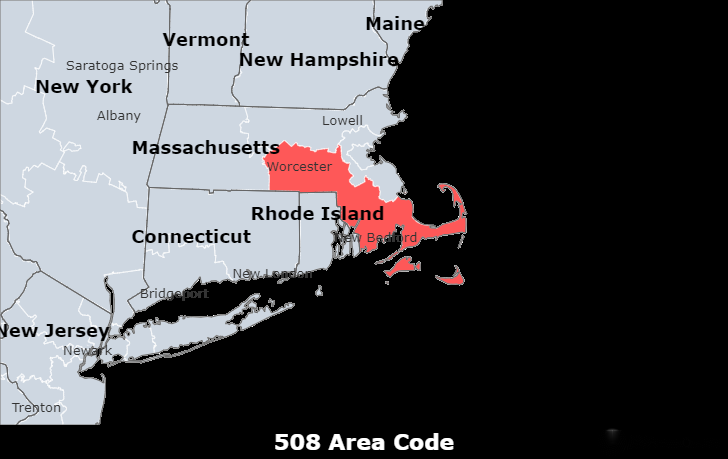 Where is area code 508 located?

Area code 508 is located in Massachusetts and covers Worcester, New Bedford, Brockton, Fall River, and Framingham. It has a single overlay (774) that serves the same area.

What timezone is used for area code 508?

The 508 Area Code is located in the EasternTimezone.

What is the major city covered by area code 508?

Worcester, city, seat of Worcester county, central Massachusetts, U.S., on the Blackstone River, about midway between Boston and Springfield. A major commercial and industrial centre and the state’s second largest city, it is the hub of an urbanized area composed of a number of towns (townships), including Holden, Shrewsbury, Boylston, Millbury, Auburn, and Leicester. The original settlement (1673) was disbanded during King Philip’s War (1675–76), and permanent settlement was not realized until 1713. The community was incorporated as a town in 1722 and named for Worcester, England.

Which area codes are closest to 508?

Since area code 508 has stopped working since 2001 and was replaced with area code 774. It is highly unlikely that you would receive a call with the area code 508. However, if you do receive such a call, it is recommended that you do not answer that and block the number as it is probably a scammer using software to mask their original area code with a fake one. Being vigilant with unknown numbers and callers is the best way to deal with suspicious area codes and keep your information safe. And it is important to never share any personal information like your address, social security number, bank account number, etc. with any unknown caller.

1.Local numbers make your customers feel more connected to you. Clients often prefer to deal with businesses in their own locale. An 800 number may make your business seem too impersonal or large. Customers can have the convenience of making a call to a local number as opposed to an 800 number or an unrecognizable area code.

How can I find a phone number with the 508 area code that is available?

Get a 508 area code number for your business

Connect with your local community by using a local number.