Pick a 480 area code phone number for your promotion
For branding considerations, it’s important to have a memorable local number.

It is normal to feel worried when a new area code pops up into your phone's screen. You don't have any clue where is the call from or who is calling you. Since there is a large number of three-digit telephone numbers being used in every country, it can be confusing sometimes. Area code 480 is a telephone area code in the North American Numbering Plan that is being used across North America. Below are some commonly asked questions regarding the area code. 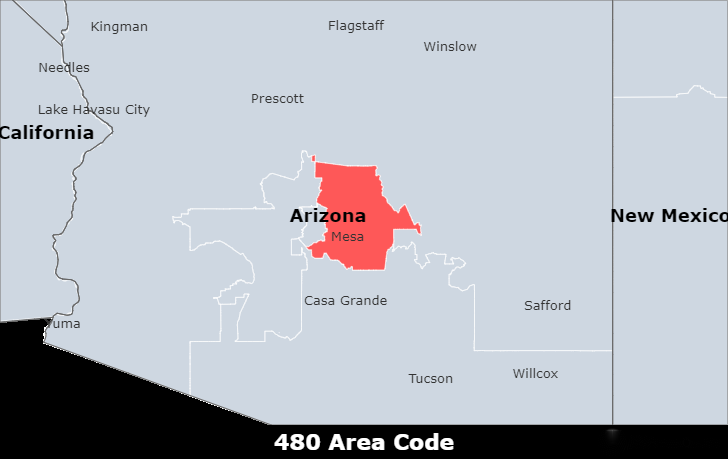 Where does area code 480 come from?

Area code 480 is the area code for Mesa, AZ and the surrounding areas. It is the only area code that serves the area.

What timezone is used for area code 480?

What is the major city covered by area code 480?

Mesa, city, Maricopa county, south-central Arizona, U.S. The name is Spanish for “tabletop” or “tableland.” A southeastern suburb of Phoenix, the site was settled and founded in 1878 by Mormons who used ancient Hohokam canals for irrigation. Laid out on a grid plan with 130-foot- (40-metre-) wide streets, the community became the focus of an agricultural and fruit-growing region, developed from a Salt River reclamation project. It experienced rapid growth after World War II, and its basic farm economy diversified to include manufacturing, tourism, and retail trade. It is the site of a Mormon Temple (1927), Mesa Community College (1965), and the University of Arizona’s Agricultural Experimental Station. Salt River Pima-Maricopa Indian Community is across the river to the north. The Chicago Cubs have their spring training camp there. In 2007 commercial air service began at the Phoenix-Mesa Gateway Airport (previously known as the Williams Gateway Airport)—on the site of the former Williams Air Force Base—providing the Phoenix area with its second commercial airport. Inc. town, 1883; city, 1930. Pop. (2010) 439,041; Phoenix-Mesa-Glendale Metro Area, 4,192,887; (2020) 504,258; Phoenix-Mesa-Chandler Metro Area, 4,845,832.

Which area codes are closest to 480?

No. Area code 480 is a telephone area code that is not toll free. Calls and text messages placed from any 480 number costs you an amount that will be charged from your account and will reflect on your phone bill. Charges can be done per-minute or by a monthly subscription. International calls could cost more pricey than the local ones.

The importance of choosing a vanity local umber for your branding

Local phone numbers provide a genuine presence for your organization in certain target markets and make it more accessible to individuals in both local and international places. The following are some of the advantages:

1. Establishing a local presence in a certain city.

4. Improving the efficiency of your company.

Above all, local phone numbers are a low-cost means of expanding a business.

Can I request a specific phone number with 480 area code?

Get a second phone number in less than 3 minutes with EasyLine! EasyLine for business is a viable alternative for small businesses, solopreneurs, and freelancers.

You can set up phone numbers for your company or business within minutes, irrespective of the size of your organization.

3.Select and get your second phone number and you can put in your preferred area code (or buy a toll free number).

EasyLine is the most efficient option for both you and your customers.

Get a 480 area code number for your business

Switching to EasyLine saves our clients thousands of dollars on average.