Get a 419 area code phone number for your local marketing.
From any location in Toledo and establish yourself as a local business.

419 is one of the original 86 area codes created by AT&T and the Bell System in 1947. It originally served northwest Ohio including Toledo. In 2002, area code 567 was created and is currently an overlay to 419. 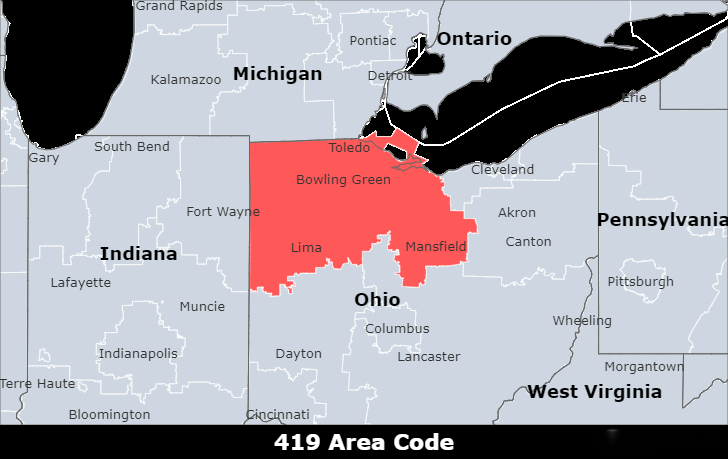 Where is area code 419 located?

Area code 419 is located in northwestern Ohio and covers Toledo, Mansfield, and Findlay. It has a single overlay (567) that serves the same area.

What timezone does the area code 419 belong to?

The 419 Area Code is located in the EasternTimezone.

Toledo, city, seat (1835) of Lucas county, northwestern Ohio, U.S., at the mouth of the Maumee River (bridged). It lies along Maumee Bay (southwestern tip of Lake Erie), about 55 miles (89 km) southwest of Detroit, Mich., and is a principal Great Lakes port, being the hub of a metropolitan complex that includes Ottawa Hills, Maumee, Oregon, Sylvania, Perrysburg, and Rossford. The area was opened to white settlement after the Battle of Fallen Timbers, a conflict fought nearby in 1794 and resolved in a series of treaties negotiated with Native Americans between 1795 and 1817. Fort Industry (1803–05) was located at the mouth of Swan Creek (now downtown Toledo), where permanent settlement was made after the War of 1812. Two villages, Port Lawrence (1817) and Vistula (1832), were consolidated in 1833 and named for Toledo, Spain. The united community was incorporated as a city in 1837.

What area codes are nearby 419?

One amazing way to create a strong and impressive local presence is to invest in a local virtual phone system from a specialist service provider such as EasyLine. Here are some instant benefits or advantages that your organization will accrue by investing in a local number:

2.Personalized Customer Greetings: Virtual phone numbers make it simpler for your organization to nurture a lasting relationship with customers.

3.Voicemail, call recording, Auto-attendant, and business hours are just a few of the innovative features that your company will get to enjoy through a local virtual phone number.

Where can I get a local phone number with 419 area code?

EasyLine offers plenty of affordable phone numbers for businesses and individuals. With EasyLine, you can easily create a local presence in any location in the USA or Canada. If you are a businessman, here is the most important fact: local numbers are more likely to be answered by prospects and customers. By the way, with EasyLine, there are no hidden fees, no long-term contracts, and no surprises.

Get a 419 area code number for your business

Establish a local presence anywhere by publishing a phone number with any area code you want.