417 was first put in service January 1, 1950. To avoid exhausting all possible phone numbers in this area code, relief planning has begun. 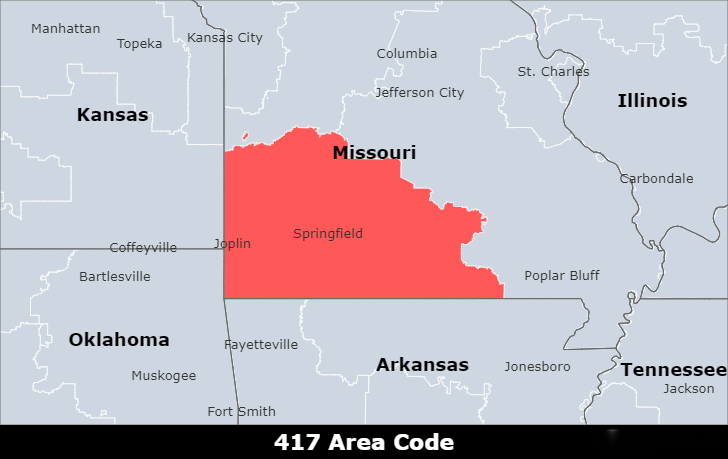 What is the location of area code 417?

Area code 417 is located in southwestern Missouri and covers Springfield, Joplin, and Nixa. It is the only area code that serves the area.

What is the timezone of area code 417?

The 417 Area Code is located in the CentralTimezone.

What is the major city in area code 417?

Springfield, city, seat (1833) of Greene county, southwestern Missouri, U.S., near the James River, at the northern edge of the Ozark Highlands, north of the Table Rock Lake area. Settled in 1829, its growth was slow until the period of heavy westward migration, when pioneers were attracted by its location on important land routes. During the American Civil War the city was held for a few months by Confederate forces after the Battle of Wilson’s Creek (Aug. 10, 1861; fought 10 miles [16 km] southwest) until they were expelled by Union troops in February 1862. James Butler (“Wild Bill”) Hickok lived in Springfield and was a Union scout; he was acquitted there of the murder of gunman Dave Tutt. An extension of the Atlantic and Pacific Railroad (1870) resulted in the development of a rival community, North Springfield, which merged with Springfield in 1887.

What can a local phone number do for your business?

Improve your workflow with a business second line

1.Use your personal cellphone to receive and make calls from your company number.

2.Decrease the time it takes to respond to crucial business calls.

3.Never miss a call from a customer or prospect again.

4.Embed all of EasyLine’s sophisticated business phone capabilities on your mobile device.

What's the best way to acquire a 417 phone number?

Don’t have a number to transfer across? Looking to create a local presence somewhere else? No problem — we have plenty of phone numbers for you to choose from. EasyLine offers local numbers with the best pricing in any areas in the United States and Canada. EasyLine, the phone system for scaling businesses, is the best choice for you. A unique vanity local phone number could boost your sales and leads for sure.

Get a 417 area code number for your business

Targeting hyper-specific markets by using an area code that callers are familiar with.