Many people have got the tendency to wonder about phone calls with new area code numbers. Part of the things that a majority worry about is the location of the caller as well as the question of how genuine the call may be. Here below is a guide for you about area code number 330. 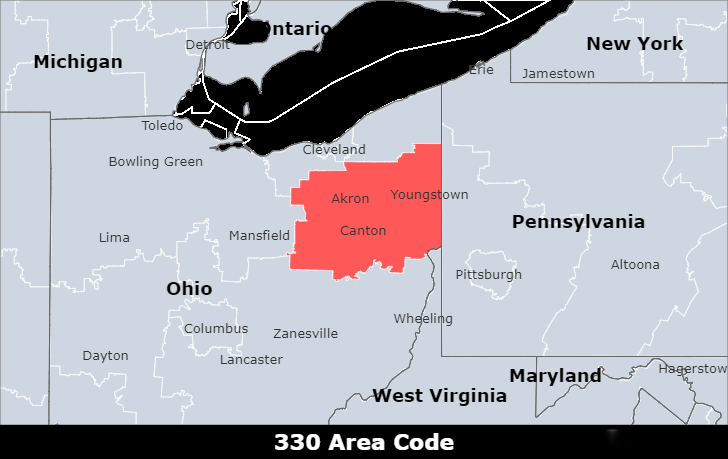 Area code 330 serves northeastern Ohio except the area along Lake Erie. It includes the cities of Akron, Canton, and Youngstown. It has a single overlay (234) that serves the same area.

What timezone does the area code 330?

What is the major city in area code 330?

Akron, city, seat (1842) of Summit county, northeastern Ohio, U.S. It lies along the Cuyahoga River, about 40 miles (64 km) south-southeast of Cleveland. Akron is the centre of a metropolitan area that includes the cities of Cuyahoga Falls, Tallmadge, and Stow and several villages. At 1,081 feet (329 metres) above sea level, it was named for its “high place” (Greek: akros) on the watershed between the Mississippi River and the Great Lakes. Laid out in 1825 by Gen. Simon Perkins, commissioner of the Ohio Canal Fund, the town was assured substantial growth by the completion of the Ohio and Erie Canal in 1827 and of the Pennsylvania and Ohio Canal in 1840, linking it with Pittsburgh. Waterpower and transportation supplied by these canals led to Akron’s early development as an industrial centre. The abundant water supply and the arrival of the railroads prompted Benjamin F. Goodrich to move a small rubber factory to the site in 1871. This industry rapidly expanded with the advent of the automobile and the demand for rubber tires. Between 1910 and 1920 the city’s population tripled to more than 200,000, and Akron became known as the “rubber capital of the world” and the international or American headquarters of the far-flung giants of the rubber industry—Firestone, General Tire, Goodrich, and Goodyear; by the late 20th century, however, only Goodyear remained. The city’s manufactures are now well diversified and, apart from a wide variety of polymer and plastic products, include farm machinery, automotive parts, toys, power-generating equipment, and chemicals. The city has largely shifted away from a manufacturing economy, however, while the service and trade sectors have grown. In the late 20th century some manufacturing plants and downtown stores were closed, but by the late 1990s several large-scale projects had succeeded in stimulating a revitalization of the downtown area.

What are some of the local codes near 330?

Are there any scams from area code 330?

Are telephonic calls from 330 toll free?

Why should you obtain a prestigious local business phone number?

1. Be a local – You can expand your business operations to a specific location without expanding your infrastructure or opening a local office.

2. Save money: Why pay more by using only international toll-free phone numbers? When receiving calls, save money by using a local phone number.

3. Boost your advertising by getting listed in local directories and company directories.Make an impression on the people in your neighbourhood.

4. Make it simple to contact you: Your consumers won't have to pay for long-distance calls to reach you. It is simpler and less expensive to use local phone numbers.

5. Hide your number: When making outgoing calls, you may also mask your principal company number with a phone number with a local area code.

Is it possible to request a specific phone number with the area code 330?

Get a 330 area code number for your business