Contact your local customers by using the number of 325 Area Code number.
Get a permanent local phone number for your home or business. 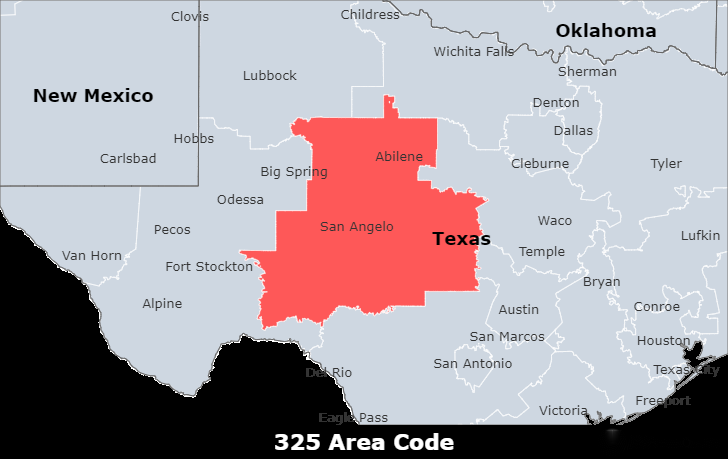 What is the location of area code 325?

Area code 325 is located in central Texas and covers Abilene, San Angelo, and Brownwood. It is the only area code that serves the area.

What timezone is used for area code 325?

What is the major city covered by area code 325?

Abilene, city, seat (1883) of Taylor county (and partly in Jones county), west-central Texas, U.S. It lies on low, rolling plains 153 miles (246 km) west of Fort Worth. Founded in 1881 as the new railhead (built by the Texas and Pacific Railway) for the overland Texas cattle drives, it took not only the business of the previous railhead, Abilene, Kansas, but also its biblical name, which in Hebrew means “grassy plain.” The city’s economy, originally based solely on livestock and agriculture, has expanded to include industry. Petroleum and natural gas are produced in a multicounty area, of which Abilene is the centre. The city’s manufactures include light machinery, aerospace structures, and band instruments. Abilene is the site of Hardin-Simmons University (1891; Baptist), Abilene Christian University (1906; Churches of Christ), and McMurry University (1923; United Methodist). Dyess Air Force Base lies just southwest. The West Texas Fair, rodeos, and livestock shows are annual events. The Grace Museum, comprising an art museum, a historical museum, and a children’s museum, is a local landmark, now listed on the National Register of Historic Places. Old Abilene Town (northeast) is a reconstructed Texas frontier town. Inc. 1883. Pop. (2010) 117,063; Abilene Metro Area, 165,252; (2020) 125,182; Abilene Metro Area, 176,579.

Which area code is closest to 325?

What are the benefits of getting a local phone phone number for business?

1. Be a local - You can expand your business operations to a specific region without scaling up your infrastructure or setting up an office in that city.

2. Cut down on cost - Why incur more charges with only international toll-free phone numbers? Spend less with a local phone number while receiving calls.

3. Advertise better - Get featured in local directories and business listings. Make your presence felt in the local communities.

4. Make it easy to reach you - Your customers don’t have to spend money, making long distance calls to talk to you. It is easier and cheaper on local phone numbers.

5. Mask your number - You can also mask your primary business number with a phone number with a local area code, while making outgoing calls.

Is it possible to get a phone number with the 325 area code?

If you want to acquire a local phone number for the best price and service in any cities of USA and Canada, EasyLine is the way to go.

EasyLine is the most suitable phone system for small businesses. On average, our small business clients save thousands by switching to EasyLine. EasyLine was also built to empower solopreneurs and freelancers. Indispensable essentials make your business up and running much easier.

With EasyLine, you could easily get a second phone number for your business in less than 3 minutes! Now, go to pick a number you like, and give your company a trustworthy image that local clients will appreciate.

Get a 325 area code number for your business

EasyLine-Not only calls, but small-business marketing solutions are available.