EasyLine provides local phone numbers throughout the United States.
EasyLine is the most effective solution for you and your clients. 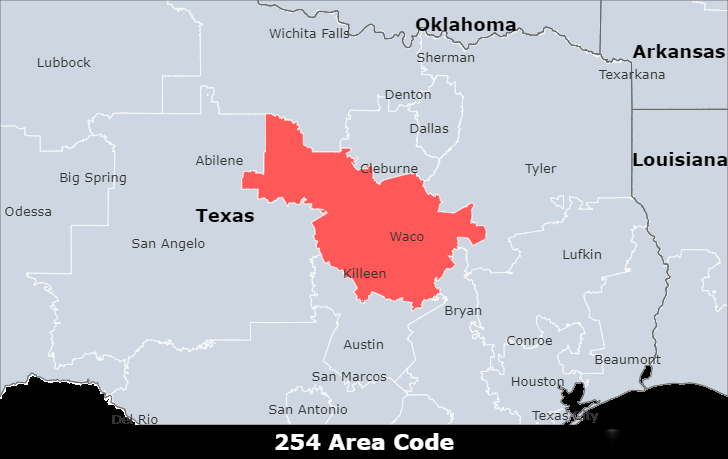 Area code 254 is located in central Texas and covers Killeen, Waco, and Temple. It is the only area code that serves the area.

What is the timezone of area code 254?

The 254 Area Code is located in the CentralTimezone.

What is the major city in area code 254?

Killeen, city, Bell county, central Texas, U.S., lying west of Temple and 65 miles (105 km) north of Austin. Laid out (1882) as Palo Alto by the Santa Fe Railway and named for Frank P. Killeen, a civil engineer with the line, it remained a small farming and ranching community until Camp Hood (a U.S. military reservation covering a large area of hillock-studded mesa) was established nearby in 1942. Killeen rapidly developed as a service centre for the camp, reestablished in 1951 as Fort Hood, headquarters of the First Armored Division. Robert Gray Army Airfield and West Fort Hood are immediately west of the city. Killeen is the seat of Central Texas (junior) College (1965) and the University of Central Texas (1973; private). Inc. 1908. Pop. (2000) 86,911; Killeen–Temple–Fort Hood Metro Area, 330,714; (2010) 127,921; Killeen–Temple–Fort Hood Metro Area, 405,300.

The importance of choosing a vanity local umber for your branding

People are proud of their communities and want to support local businesses. When you call, the first thing that someone notices is the location from which you are calling. If they notice their own area code, you've just established a vital connection with them by indicating that you're both from the same neighbourhood.

How can I obtain a 254 local phone number?

Don’t have a number to transfer across? Looking to create a local presence somewhere else? No problem — Get an extraordinary local number for your small business with EasyLine. EasyLine offers all types of numbers in all 48 mainland US states, and most Canadian states.

With EasyLine, we provide branding solutions for small business, solopreneur and freelancer, it helps you capture the attention of your audiences. You can also make business calls using VoIP and cellular phone service, it’s a more flexible phone service for individuals and small businesses.

If you’re looking forward to getting a local number for the best price, EasyLine is definitely the one you’d pick. A unique vanity local phone number could boost your sales and leads for sure.

Get a 254 area code number for your business

On average, our clients save thousands by switching to EasyLine.