Select a 252 number for your local company.
EasyLine is the most efficient option for both you and your customers.

When a new area code shows up on your mobile phone can be really worrying. Is the call important? Where is it coming from? Is it associated with scammers? The 252 number is a unique code created to serve a specific area. Below are some commonly asked questions about the area code 252... 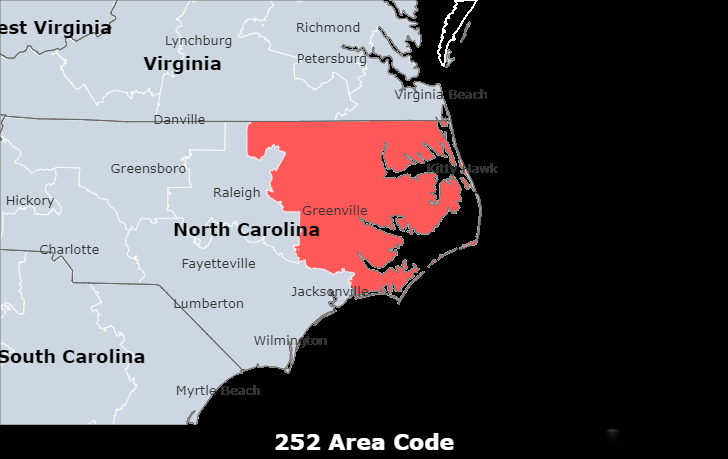 Where does area code 252 come from?

Area code 252 is located in northeastern North Carolina and covers Greenville, Rocky Mount, and Wilson. It is the only area code that serves the area.

What timezone is used for area code 252?

The 252 Area Code is located in the EasternTimezone.

What is the major city covered by area code 252?

Greenville, city, seat (1797) of Greenville county, northwestern South Carolina, U.S., on the Reedy River, in the foothills of the Blue Ridge Mountains. First called Pleasantburg when the area was settled in the 1760s, it was renamed Greenville in 1821, probably for Isaac Green, an early settler, and was chartered as a village in 1831. Before 1860 it was a summer resort community. As the western terminus of the Greenville and Columbia Railroad, the city served as the commercial centre for the Piedmont (rolling upland region) and for entry into the nearby Appalachian Mountains. Greenville strongly opposed nullification (in U.S. history, a doctrine holding that a state, within its territorial jurisdiction, has the right to declare null and void any federal law that violates its voluntary compact embodied in the Constitution) in 1832 and secession from the Union in 1860. Notable among the Unionists was Benjamin F. Perry, Greenville editor and later state governor.

Which area codes are closest to 252?

Since there are a large number of users of 252 numbers, it is really common that a scammer might be also using a 252 number. The caller may claim that they are from a business or company's customer service team, and may ask questions that may involve in getting your personal information.

The 252 numbers are not toll free. Both international and local calls may apply charges. The cost of the charge may vary on the company you acquired your cellular mobile and paging services.

People take a lot of pride in their communities and like to support local businesses. The first thing someone will notice when you call is the area you are calling from. If they see their own area code, then you will have established a valuable connection before even talking to them by showing them that you are a part of the same community.

Not only do people like to support local businesses, but they also place more trust in businesses located within their own communities. It’s easier to believe that an order placed with a company in your own town or city will arrive on time and in full, for example, than it is to trust that you’ll get the same result from a business based in a city far away.

How can I find a phone number with the 252 area code that is available?

To get a second phone number, you don't need any groundbreaking technical skills. All you have to do now is to try EasyLine, and you'll be ready to go. EasyLine now provides your business with a local phone number, no matter you are a small business, or individuals. EasyLine is a fantastic service that gives you a second phone number as well as all of your phone's features. From a single device, you can manage both your personal and secondary phone numbers and easily distinguish between them. To get a taste of what you'll be getting, we recommend taking advantage of EasyLine's free trial.

Get a memorable & professional business phone number to make your brand stand out in the crowd now.

Get a 252 area code number for your business

Thousands of companies trust EasyLine to reach their customers and prospects.