Get a 218 number for your business.
Establish your local presence with our available area code.

218 is one of the original 86 area codes created by AT&T and the Bell System in 1947. It originally served most of the state of Minnesota except the southeastern part of state. 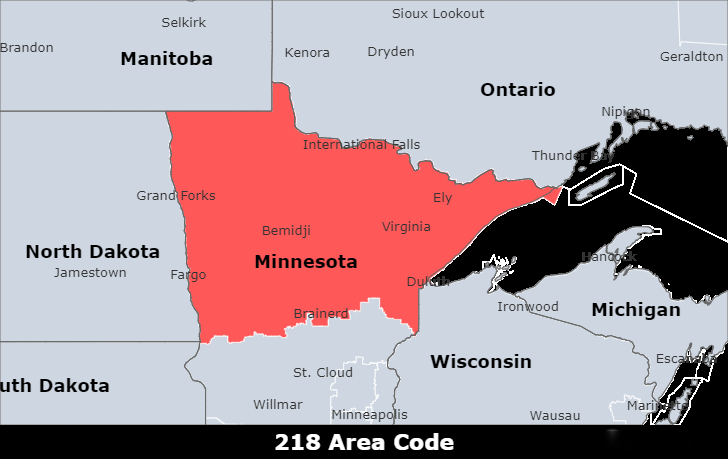 Area code 218 is located in northern Minnesota and covers Duluth, Moorhead, and Hibbing. It is the only area code that serves the area.

What timezone is used for area code 218?

The 218 Area Code is located in the CentralTimezone.

What is the major city covered by area code 218?

Duluth, city, seat of St. Louis county, northeastern Minnesota, U.S. One of Minnesota’s largest cities, it is a major inland port on the western tip of Lake Superior, at the mouth of the St. Louis River, opposite Superior, Wisconsin. Elevation is abrupt, rising 600 feet (180 metres) above the level of the lake in high rock bluffs, once the shoreline of glacial Lake Duluth. Along the crest a 30-mile (50-km) skyline boulevard commands an excellent view of both city and harbour. The combined Duluth-Superior harbour results from a natural breakwater formed by deposits left where river and lake meet. This resulting 9-mile (14-km) strip, Minnesota Point, or Park Point, extends toward Wisconsin Point, separating St. Louis and Allouez bays from Lake Superior. The narrow channel between the two points forms the Superior harbour entrance, and a dredged 300-foot (90-metre) ship canal across Minnesota Point, spanned by an aerial lift bridge, forms the Duluth harbour entrance. The combined harbour is the western terminus of the St. Lawrence Seaway, and, although icebound during the winter months, it is the largest port on the Great Lakes and one of the largest inland seaports in the world. Among the items shipped through it are iron ore from the Mesabi Range, coal from the western United States, and grain from the Red River valley and Canada. Harbour facilities include coal docks, grain elevators, and iron ore docks (which receive taconite from processing plants in northeastern Minnesota).

Which area codes are closest to 218?

1. Greater visibility: Having a local phone number may help you create your brand and grow your business.

2. Simple tracking: Using local numbers draws clients from the surrounding region and allows you to better service them.

3. Improved connectivity: Local numbers link you directly to a customer service professional in your local store.

4. Extending your business reach: If you have a local office and wish to spread your services to other cities. What would you do in this situation? Get a local phone number in the other city first.

How do I obtain a certain phone number with the area code 218?

It's critical to have a memorable local number for branding purposes. EasyLine is a trustworthy provider of local phone lines in the United States and Canada. We have the most comprehensive database of local numbers from various cities. You can now buy a local phone number and start using the service right immediately. We provide a free trial to evaluate the quality of our service, with no commitment after the trial.

You can obtain a local business phone number by following the procedures below:

Step2: Determine if you want to use toll-free numbers or local numbers.

Step 3: Look for and choose the desired number.

Alternatively, you can download EasyLine from the App Store or Google Play, then choose a number and plan to purchase.

Get a 218 area code number for your business

Separate your work and personal lives.